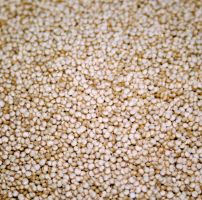 The recent history of Quinoa (pronounced keen-wah) is similar to that of polenta and several other ancient foods. For many years it was regarded as fit only for the poor or for local consumers. Now it has been rediscovered and is being hailed worldwide as a long-lost wonder food.

Quinoa was cultivated in South America for thousands of years before the Spanish conquest. Its great value as a food was recognized by the Incas who surrounded it with ritual and called it 'the mother of grains.'  The Spanish settlers, though, tended to scorn quinoa, suppressing its cultivation and encouraging the growth of maize or wheat instead.

Modern science has been quick to support the Incas' view of quinoa by making vast claims for its nutritional importance.  It is exceptionally high in protein, containing as it does many of the essential amino acids (i.e. the chemical substances that make up protein), as well as being a rich source of iron, magnesium, and vitamins B and E. Although often described as a grain, it is in fact a seed related to the family of plants that include spinach and chard. An added bonus for people having to follow certain kinds of dietary restriction is that it is gluten free and easily digested.

And, as if these nutritional and health-giving qualities weren't enough to give quinoa an essential place in the modern kitchen, non-vegetarian as well as vegetarian, it is wonderfully easy to use. It takes little time to cook, and is adaptable in the most useful of culinary ways. Lacking a truly distinctive flavour of its own, it absorbs the dominant tastes of the food it is being cooked with.

It comes in various colours. In Britain the one most readily available is golden (or yellow/ivory). Red quinoa is more difficult to find, but it is obtainable. Quinoa is similar in appearance to rice, couscous, or bulgar wheat, and, as far as cooking is concerned it can be used perfectly well as a substitute in many of the recipes associated with grains such as these. It is, however, the most attractive-looking of them all.  When cooked properly (and it's important not to boil or overcook it), the quinoa takes on a pearly, translucent sheen.

Again like polenta, in earlier times quinoa would have been laborious to prepare. In its natural state it has a hard bitter coating and has traditionally required a good soak and much rinsing before becoming fit to eat. Commercial processing has now removed much of the labour. The quinoa readily available in real and health food shops needs minimal preparation. Follow directions on the packet, or, this is the method I prefer.

How to cook quinoa

As with rice, quinoa increases substantially in volume when cooked. The 110g (4oz) I have suggested here is a nominal and convenient amount to cook, being usually enough for four people.  It is, of course, possible to cook smaller amounts, but as cooked quinoa keeps well in the fridge for several days, and is perfect for adding to various other dishes, it's generally a good idea to cook more than you need immediately.

Take 110g (4oz) of quinoa. Rinse under cold running water. Put into a saucepan and cover with 300ml (½ pint) of cold water. Or, if convenient for the dish you are preparing, you can use stock instead of water.  Bring to boiling point, but don't allow to boil. Reduce the heat and simmer at a low heat for 10 minutes. The proportions of quinoa to liquid are difficult to fix with precision.  If the quinoa seems to be thickening too quickly, add a little more water or stock. When the ten minutes are up, turn the heat off, put the lid on the saucepan and leave it to stand until any remaining water is absorbed. The quinoa is now ready to use.

Once cooked, quinoa can be used in the same way as rice, topped with vegetables or a sauce, or combined with vegetables and served as a side dish.  In stews or casseroles or soups, you can even by-pass the separate cooking entirely and add the rinsed quinoa to a dish while it is being cooked. If so, you should allow at least 15 minutes for it to cook thoroughly.

I prefer to cook the quinoa first and to combine it with other ingredients. Here are three sample recipes, favourites of mine: