Couscous is another of those ancient foods - along with bulgar wheat, quinoa, and polenta - that used to be enormously time-consuming to prepare and cook but are now, thanks to modern food-technology, easy to manage and all but instantly available. And although traditionally associated with stewed meat, couscous in its modern form has been a boon to vegetarians.

Rather confusingly, the word couscous applies equally to the main ingredient itself - tiny, rolled, pellets of semolina - and to the completed dish. It is also slightly confusing that couscous is made of flour and is not technically a grain, though it is very often described as one.  A staple throughout North Africa, couscous is steamed over a slow-cooking stew so that it can absorb the flavours from the meat and vegetables. The couscous and the stew are then served together. It's easy to see how the two uses of the word have blended into one.

Nowadays, the couscous that is used pretty well universally - in restaurants as well as at home - is pre-cooked, and really couldn't be easier to prepare. Here's how:

In a medium-sized saucepan bring 600ml (1 pint) of lightly salted water, to the boil. Turn the heat off.  Then add to the hot water 225g (8oz) of couscous. Stir, put the lid on the saucepan and leave to stand for about 7 minutes by which time all of the liquid should have been absorbed. Add a couple of pieces of butter (or a preferred alternative), and using a fork lightly whisk this into the couscous. It is now ready to serve.

Couscous is very adaptable and can be used in much the same way as, say, rice or mashed potatoes. It is probably lighter than either of them, and has an attractive, faint creamy texture. For any vegetarian, it is an extremely convenient food to have ready to hand in the kitchen. 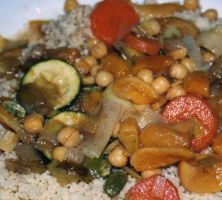 But, it is not simply a functional food. For couscous (the dish) makes a delicious, spicy, supper meal; an easy to prepare aromatic vegetarian equivalent of those rich, North African slow-cooked meat stews. And. as it takes little time to cook, it's an attractive supper option for two people, or it can be just as attractive prepared for a more formal dinner party.

The quantities given here are plenty for 4 people. They can be varied as you wish (for instance, slightly more apricots, slightly less carrots or fewer chickpeas, or whatever). You can also easily vary the vegetables. If you are cooking for fewer than 4 people, simply reduce the amounts given here.

In a deep frying pan, gently fry the leek/onion and carrots for a couple of minutes. Stir in the apricots, chick peas, and all the spices(including salt and pepper). Cover with stock, bring to the boil and simmer. The sauce will gain greatly from being cooked very slowly for about 30 minutes. It will also thicken during this time so be ready to add more stock as needed. Add the courgettes with about five minutes still to go, and then finally stir in the honey when the cooking is completed.

With a bit of neat timing you can prepare the couscous (as described above) while the stew is cooking.

It's a good idea to serve the couscous with a variety of simple side dishes, after the fashion of Mediterranean or North African mezze, though perhaps fresh rather than cooked. For example, grapes, nuts, parsley, dried fruit (raisins, sultanas), and a range of crudités.