In British usage the final s is often dropped from Brussels in order to make it a less cumbersome word to pronounce. But

strictly speaking that final s should be retained  because the vegetable is named after the capital city of modern Belgium where sprouts are said to have been widely cultivated in the Middle Ages. That may be so, but the existence of sprouts can be dated back to antiquity. In Britain they seem to have been virtually unknown until the second half of the nineteenth century where, late arrivals though they may have been, they quickly established a fierce love-hate relationship with the British public.

We are said to eat more of them than any other other country in the world. At the same time they are also high on any list of the vegetables we most dislike. The explanation for this curious contradiction lies largely, of course, in their statutory appearance on the Christmas dinner plate, a moment that many people claim to regard with foreboding. Certainly, it's a dispiriting early December experience to find in the supermarkets gigantic mounds of sprouts looking as though they have been dumped there straight from transporter lorries, like sand and cement on building sites.

There's no way this particular Christmas culinary habit is going to be by-passed (or. indeed, needs to be), but it can be placed in perspective by cooking Brussels sprouts with care, and, I would strongly recommend, by choosing to eat them now, rather than waiting for Christmas. They begin to be harvested in September, and throughout October and November they appear in greengrocers' and supermarkets looking just as they should do. Compact,  tightly leaved, budlike miniature cabbages; a startling pale bright green; in small quantities, often from local producers; perhaps a little more expensive than they will be two months further on, but remarkably good value, in both culinary and financial senses.

Brussels sprouts are famously nutritious, being especially high in vitamins A and C. They are delicious if cooked sensibly. As part of a formal meal, they are a perfect complement to potatoes (mashed or roast) and to root vegetables, hence their understandable popularity at Christmas. This applies whether the Christmas dinner is vegetarian or non-vegetarian for they go just as well with a savoury loaf or pie as with a turkey or goose. And not only that. Throughout the autumn, at their best and readily available, they can accompany,and enhance, suppers based on vegetarian pies, sausages, or burgers, and any number of tasty vegetable, bean, or lentil stews.

There are various ways of cooking them. They make excellent soups and purées; and, looking ahead to left-overs, provide an unrivalled contribution to Bubble and Squeak. Some people prefer them to be steamed rather than boiled. This does give them a gentler flavour and may also help reduce the lingering smell of boiled sprouts that I can't deny is one of their less agreeable features.  Even so, I think they are a truly important autumn vegetable, and for me there is really only one way to cook them.

Brussels sprouts. If being served as part of a dinner, allow about half-a-dozen per person.
Nuts, fresh if you wish, but dried work perfectly well. My personal preference is for  Brazil nuts, but walnuts, pine nuts and hazelnuts are all good alternatives.
Olive oil
Butter
Salt and pepper

Christmas-season sprouts often need their dry, yellowing outer leaves removed. Not so in autumn. Just lightly trim the hard stalk at the bottom and, using a sharp knife, cut a shallow cross into it. Then make a single cut in 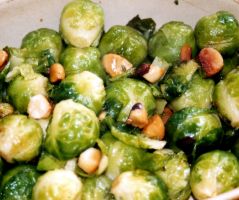 to the top of the sprout. Place them in boiling salted water, return to the boil, reduce and cook at a medium heat for about 8 minutes, or until they are can be pierced easily with a sharp pointed knife. They should not be softer than that.

Drain, and reserve the cooking water for stock. Put the olive oil and a knob of butter in the saucepan and gently fry the nuts in it for a couple of minutes. Then stir in the sprouts, add pepper, and salt if you feel it is needed. Remember that they will already have absorbed some salt from the cooking water. Stir gently together to coat the sprouts and give them a glossy sheen. Heat through and they are ready to serve.