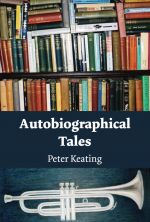 The unusual form of Autobiographical Tales has developed gradually from my experience as a literary historian. Usually I would look outward onto literature, placing it within its social and political context. Here, I have treated certain important parts of my own life in much the same way.

There are three inter-related memoirs in Autobiographical Tales: ‘Kenny,’ ‘Monica,’ and ‘Trevor.’ Each is set in a different period of the twentieth century, each evokes a distinct phase of British cultural life, and each centres on the relationship between myself and a friend or acquaintance. As in most autobiographies my own views and feelings are at the heart of the book, but at the same time they are also offered as in many ways representative of larger, fundamental changes taking place in British culture.

‘Kenny’ explores the jazz revivalist movement in 1950s London. What was it like to be absorbed in jazz and convinced that it was the most original music of the twentieth century at a time when it was more widely regarded as regressive and alien to British ways? Fifty years on and traditional jazz now tends to be regarded as having been merely a fleeting trend in Britain. But is that fair or, on looking back, can we now credit jazz revivalism as having had a larger and more radical impact on popular music than is usually recognized?

‘Monica’ and ‘Trevor’ both centre on my experiences as a university teacher of English and as a literary historian, first in Leicester in the late1960s and then in Edinburgh in the 1980s.

‘Monica’ describes what it was like for me becoming a university teacher at Leicester. It is also an exercise in a very personal form of literary history. Hovering over my struggle to adjust to what from virtually the beginning I regarded as an unsympathetic way of life, was the powerful mysterious presence, strongly felt but largely unrealized at the time, of Philip Larkin. It was only by tracing the true nature of his presence and slowly learning how to identify it, that I was fully able to understand what my time at Leicester really meant to me.  ‘Monica’ explores that process and in doing so offers a fresh and revealing angle on Larkin’s life and on the genesis of many of his poems.

The personal crisis explored in ‘Trevor’ came from what felt as an irreconcilable  duality created in me by the very nature of Academia. On the one hand, the enviable freedom with which I was able to work as a literary historian and book reviewer, and on the other, the discontent provoked by having to carry out my work within a university atmosphere that I found uncongenial and increasingly unpleasant. ‘Trevor’ pursues the development of this duality to its only possible conclusion, played out in the fraught atmosphere of Edinburgh university in the 1980s in which a national crisis in higher education, the impact of Thatcherism on Scotland, and the rise of modern Scottish Nationalism all featured.

So, what was it like to become a university lecturer in the idealistic atmosphere of the 1960s and to endure the disllusionment that came with the collapse of those ideals only twenty years later? Why is that university English departments are breeding grounds for chronic discontents, many of their inhabitants fit only for comic or satirical roles in campus novels? Whatever happened to the moral and spiritual enhancement that the study of literature was supposed to bring with it?

And what part did my working class upbringing play in how I responded to all of this?  Was it influential in encouraging me to become a literary historian, fascinated by both words and the past, constantly preoccupied with relating the past to the present? Why are so many students and academics capable of viewing working-class life only in theoretical terms? Was my own working-class background to be swallowed up by educational advantage or allowed to flourish independently and to provide me with a very personal insight into life and events around me?

These are the kinds of questions that are raised and explored both individually and objectively in Autobiographical Tales.

To buy a copy of the book go to York Publishing